August 11, 2018
I have many pending posts about places in Banff National Park and Yoho National Park that I've been to since the start of this summer. I think I should start with this one. Perlahan-lahanlah kita kayuh ya? :)

I went to Banff Sunshine Village & Sunshine Meadows (from now on, will be referred as SSV) for the first time on July 28. It was kinda last minute decision. Initially, I planned to go to SSV on July 27 but I had no energy left after exploring 4 other places the day before. So, off I went to SSV in the morning of July 28.

In all honesty, it wasn't the best decision to go to SSV on that July 28. Firstly, I was rushed to go to SSV right after my shift. #sispenat #sismengantuk Secondly, it was quite hazy and hot that day. Thirdly, I wasn't prepare physically and mentally to explore what SSV has to offer that day. Fourthly, I was in a rush as I had to take the 12 pm shuttle back to Banff so that I can catch my sleep as I had to work later that night. 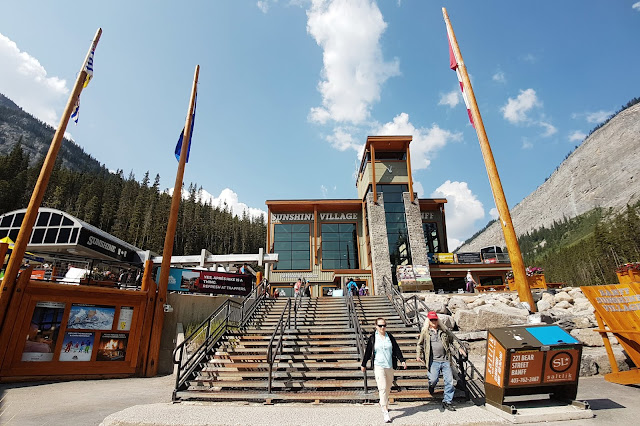 However, I decided to go to SSV despite the reasons mentioned above just because of one reason; I had one free sightseeing coupon which expires on July 29. So I thought to myself, "Why not go and check out what Banff Sunshine Village has to offer first? Kalau best, repeat. Kalau tak best, at least you've been there?"

Took the free shuttle from Banff to go there. I think it took about me 20 to 25 minutes to arrive at the base of gondola. Wasn't so sure because I slept in the shuttle and woke up right after the shuttle arrived at the base of gondola. After that, I went to the general office to change my coupon to actual ticket. However, I did line up at the ticket counter before being redirected to the general office and what I can say is, the line was not long at all. There were only 2 people in front of me. So, I guess, 9 AM and maybe earlier is the best time to go to SSV? 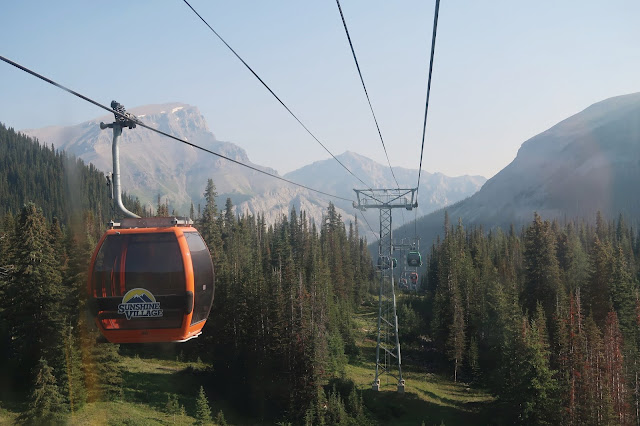 Took a gondola up to the Village and boy, what a long ride. I think it took me about 20 minutes to reach the Village. I was restless for a bit but thank god, the view was mesmerizing. After that, I had to walk for less than 3 minutes to get on the Standish chairlift to go up to the Standish Viewpoint. It was a fairly short ride. It was less than 10 minutes, I think.

I have to say that after riding open air chairlift for few times, I am now less nervous whenever I'm on a chairlift. I think that's quite a feat for me. So, yeay for me? :) 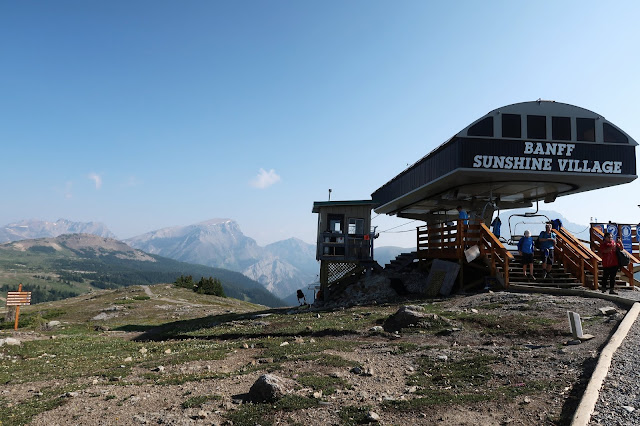 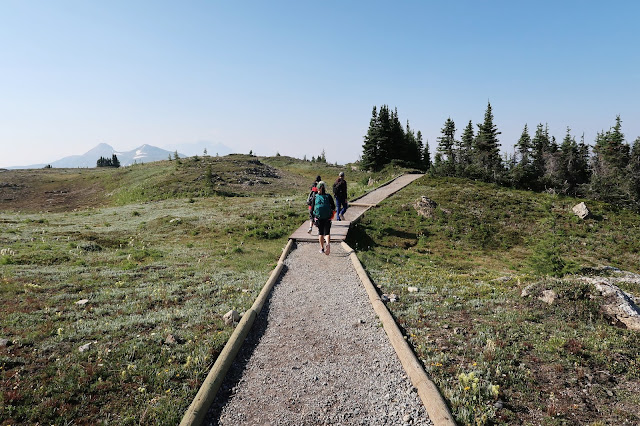 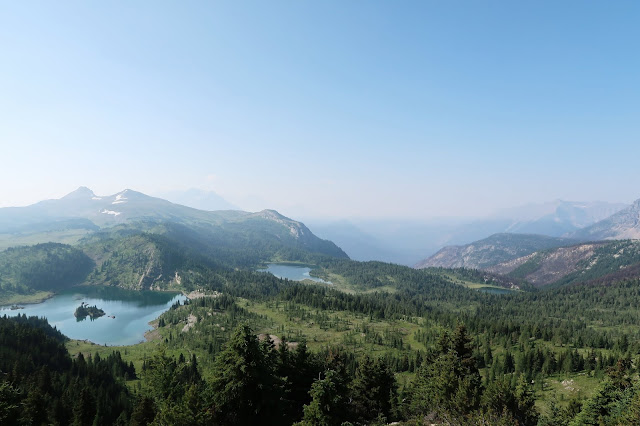 I thought that would be it but masya Allah, He proved me wrong. Sunshine Meadows appeared in front of my eyes. The Sunshine Meadows as seen from the Standish Viewpoint was easily one of the best views or maybe the best view that I have seen this summer! Allah knew how much in awe I was when I first saw the view. Again, I was utterly speechless. As I mentioned before, it was quite hazy that day. So, few of the mountains were not visibly clear to the naked eyes. I could only imagine how majestic Sunshine Meadows would be if the weather is good and clear with all those mountains as a background. 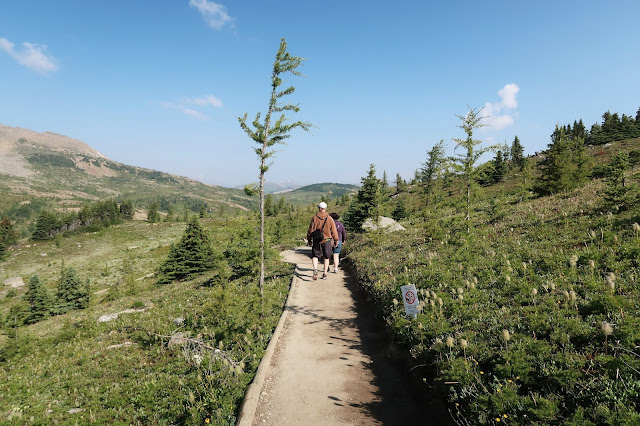 I actually went down to the hiking trail to the lakes for a bit but decided to make a U-turn mainly because I was pressed by time as I need to catch the 12 PM shuttle back to the Town of Banff. Other reasons for the U-turn were I forgot to bring bug spray and my legs were still sore from the hiking that I did 2 days before.

Tip: Please bring bug spray whenever you're hiking during summer in Canada. Bear spray is a plus.

As such, I decided to sit around at the Standish Viewpoint for about 45 minutes enjoying the amazing view before going down to the gondola base again. Wanted to stay longer but it was too bright and too hot. The UV index on that day was high as well. So, 45 minutes was my limit. 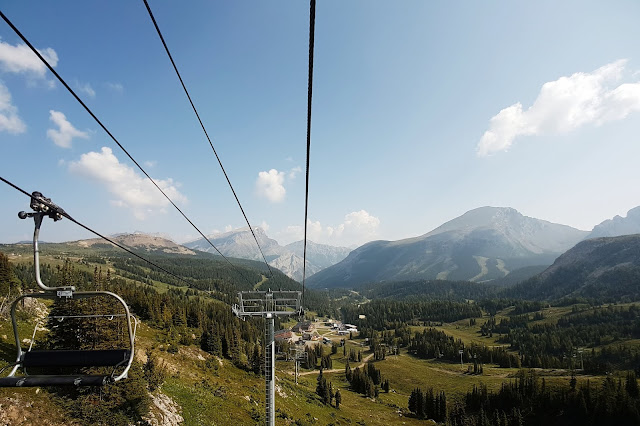 The ride down to the gondola base was filled with my self-reflection about life in general, my numbered days in Canada and my goals. Also, it was filled hope and desire that I'll get another chance to see Sunshine Meadows again, hopefully in fall this year.

At this point, all I can say is my impromptu decision to go to Banff Sunshine Village & Sunshine Meadows might be one of the best impromptu decisions that I have ever made this year. It was easily one of the most beautiful places that I have ever been in Canada and for that, I'm eternally grateful for the chance given to me.
Alberta Banff National Park Banff Sunshine Village British Columbia Canada Mount Assiniboine Provincial Park