January 10, 2018
I finally jumped on the bandwagon of watching this Taiwan movie called Our Times. Have been reading a lot of good reviews about this movie for the last two years and I finally decided to watch it recently. Found a free time to watch it after abandoning few of my Korean dramas for a bit. lol!

Snippet of the movie (From Wikipedia) - Please skip this whole section if you don't want to read any spoilers.

The film opens in the present day, where Lin Cheng-hsin (Joe Chen) is an ordinary office worker who leads a stressful life. Her name, "Cheng-hsin", literally means "sincere of heart", reflecting her hardworking nature which often gets her ridiculed by her younger subordinates. Dejected, she listens to a cassette recording of an old Andy Lau song. This brings her back to her high school days, when she was an ordinary high school girl, who idolised Lau and lived a simple, carefree life. She had a crush on Ouyang Fei-Fan, (Dino Lee), the school's most popular male student, and had two good girl friends.

One day, 17 year old Lin (Vivian Sung) receives a chain letter, warning her of impending doom if she does not pass the message on. Naively, she passes it on to Hsu Tai-yu (Darren Wang), the school's notorious gangster boss, her math teacher and Tao Min-min (Dewi Chien), the school's most popular girl. While Tai-yu reads the letter, he gets hit by a car. After weeding out the letter's sender, the angry Tai-yu makes Cheng-hsin his 'friend' and forces her to run errands for him in exchange for leaving Ouyang alone, thus making her his errand-girl.

By chance, Cheng-hsin accidentally overhears a conversation between Min-min and Ouyang and discovers that they are in a secret relationship. Dejected, she creates an alliance with Tai-yu, who likes Tao Min-min, to break the couple up. Throughout the course of events, Cheng-hsin and Tai-yu begin to understand each other better, and their friendship evolves as they began to learn a thing or two about true love. Eventually, they develop feelings for each other.

Tai-yu later discovers that he has a blood clot in his brain, caused by the car accident and further exacerbated by his frequent brawling and falls. His parents decide to send him overseas, leaving Cheng-hsin with no way to contact him in an era without social media.

18 years later, Cheng-hsin leaves her unhappy job and relationship upon having rediscovered herself. She is still unable to book a ticket to an Andy Lau concert that is set to take place in Taipei, but fate intervenes and allows Lau to act as the means by which Lin Cheng-hsin and Hsu Tai-yu (Jerry Yan) are reunited as adults. 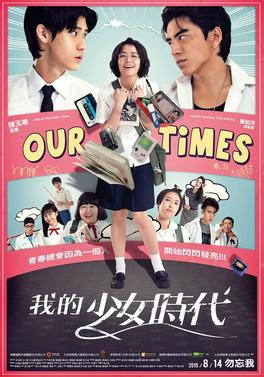 
My thoughts
What a cliche movie but I loved it! I freaking loved it. I think I can watch this movie for few times more and I will still not get bored of it! It hit all the right spots in my heart. This movie was a nice surprise for the fangirl in me cause I did not expect to see Joe Chen and Jerry Yan! Hey, hello there you two gorgeous humans! :) It brought me back to the time when Taiwanese dramas and movies were my jam. OMG! I feel so old right now T__T

Anyway, back to the movie. As I said, it was a cliche movie. Some people may find it boring and predictable at most part but each to their own, no? I actually liked the few twists in the movie cause I did not see them coming! For example, the original reason Hsu Tai Yu approached Cheng Hsin. I expected him to approach her because he wanted to get his revenge but nope! Or, when the movie revealed the true reason why Hsu Tai Yu cried when he thought Cheng Hsin was drowning. Or, when the movie revealed that Hsu Tai Yu was more than a troubled kid.

Nevertheless, as much as I loved the twists, I kinda hated them because they made me cry. Yeah, I cried watching this movie. Nothing new there as I'm a very emotional human being T__T

And may I say that Darren Wang was so swoony in the movie? Have you seen his smile? He has this million-dollar smile. And have you seen his smirk? What a tease. Now I know why people kept commenting how attractive Darren Wang is in every post of Our Times. Darn boy, you can take my heart right now! Okay, just kidding! His character might be the first bad boy character that I'm attracted to in the dramaland. I think that weighs a lot as I usually like the nice guy in every drama or movie.

In any case, I highly recommend this movie especially to the recent school leavers. Just because a good chunk of this movie revolved around high school years. To reiterate, yes, this movie was cliche but it was fun and sweet too. Do drop your comment if your heart fluttered like crazy like what happened to me while watching the movie. Haha!