December 24, 2017
Hospital Ship (병원선) was one of the recently aired dramas (I wrote this post a month ago?) that I decided to watch cause I thought, "why not?"

Snippet of the drama (from Wikipedia)
Story about young doctors that provide medical care to the locals who live in rural villages via hospital ship that sails around the little islands. Song Eun Jae is an immensely talented surgeon. There was a time when the hospital ship was just used for standard checkups and administering medicine. With Song Eun Jae on board, it can provide complicated surgery. She has seen a lot of success as a surgeon, but also a lot of struggles in her family life. When an unfortunate incident leads her to a ship instead of a prestigious hospital. She has little compassion for the stubborn elderly patients.

Kwak Hyun is the emotional opposite of his senior doctor, Song Eun Jae. Growing up with a father who is a lauded humanitarian, Kwak Hyun strives to be a warm and caring person. He heals not just with medicine but a smile. It seems natural that he works at his father’s ship, but Kwak Hyun also has some emotional scars. He cannot match Song Eun Jae’s medical skills, but he is infinitely better at connecting with patients.


Kim Jae Geol has Hallyu looks and an extensive lineage in medicine. His father is a respected doctor. Growing up, his dad always preferred his brilliant brother, which led Jae Geol to become a loner at heart. His father was obsessed with western medicine. As a form of rebellion, Kim Jae Gol studied oriental medicine, much to his father’s disapproval. His goal in boarding the ship was to escape his father’s shadow. At the ship, however, he must work under Song Eun Jae, who is just as strict, emotionless and disdainful of oriental medicine. Now, these three doctors have to put aside their polar opposite personalities in order to treat their patients. As they all soon learn, working for your fellow humans has its own way of bringing people together 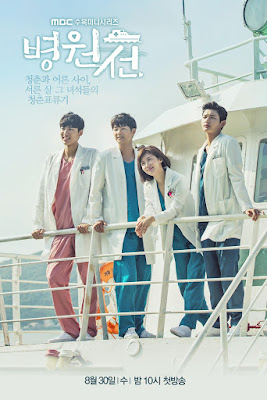 My thoughts
What a letdown. I jumped into this drama with no expectation and I finished watching it with dissatisfaction. Yes, I did love some of the aspects in this drama like its warmth, friendships, etc, but overall, this drama left a bitter taste in my mouth. Maybe because it was too long and it did not have that engaging plot. They should just make Hospital Ship 16 episodes drama instead of 20.

Few useless things that I picked up from this drama, almost from every episodes were "Kang Min Hyuk really has a good body proportion!" and "Ha Ji Won does not look like a woman in her late 30s!"

I don't recommend this drama unless if you really want to waste your time or you are big fan one of the leads. I mean, I can understand watching a drama just because your bias in it cause I do it all the time. Haha!