Oiso Korean Traditional Cuisine & Cafe, IOI City Mall is located on first floor, if I'm not mistaken, opposite of Pancake House and below GSC. Agak terceruk dan hujung tapi senang nak jumpa. The restaurant looks fancy from outside but lo, and behold it gets better from inside. I really liked the interior and ambiance of the restaurant. Very tranquil and serene.

As for the food, we ordered three type of dishes and 1 side dish so that boleh main rasa-rasa? Kalau ikut hati nak order lagi banyak, but ones has to know his/her own limit, no? Perut ada satu je dan membazir tu amalan syaitan kan. (<--- My chant every time I feel like makan tak ingat dunia) So, I ordered Soft Tofu Stew (순두부 찌개) while my best friend ordered Mushroom & Soft Tofu Stew (버섯 순두부 찌개). As for my sister, she ordered Beef Short Rib Soup (갈비탕). Also, we ordered Steamed Egg On Pot (계란찜) because I want to know its taste. 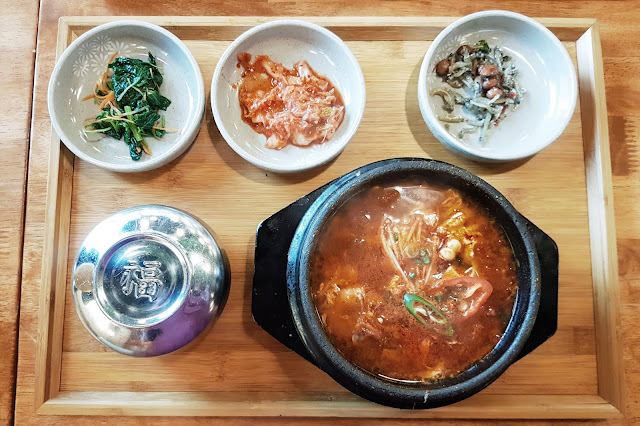 The general verdict would be okay la, not that bad. They didn't fall into "Sedapnyaaaaaaa!" category but more like, "Oh, okay? Not bad. Pernah rasa yang lagi sedap dekat tempat lain." This was particularly true with my Soft Tofu Stew. It wasn't that bad but I had tried a more delicious Soft Tofu Stew in Canada that it felt quite lacking. Also, my Soft Tofu Stew was not spicy at all even though I asked for the spicy one so orang yang tak boleh makan pedas boleh cuba makan kot? Oh, one more thing that made me felt quite sad was seafood dia tak banyak pun T_T 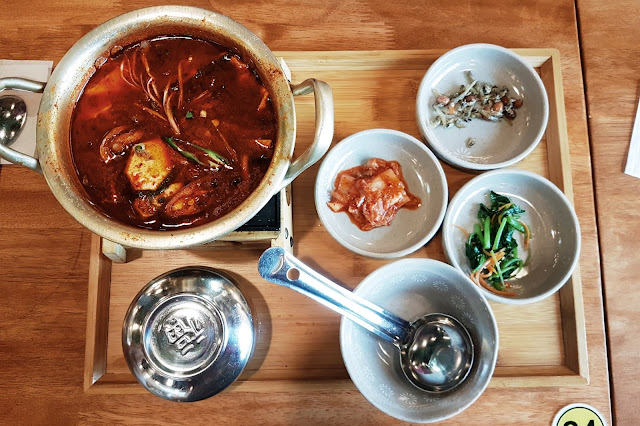 I didn't try their Mushroom & Soft Tofu Stew (버섯 순두부 찌개) because I figured it should taste the same or less like my Soft Tofu Stew. After all, it's actually soft tofu stew with mushroom, no? So, I couldn't comment on that. However, my best friend did mention that it was spicy. She was sweating while trying to finish her Mushroom & Soft Tofu Stew. Though I have to say that I'm not really sure because it was really spicy or it was because my best friend has low spicy-tolerance. 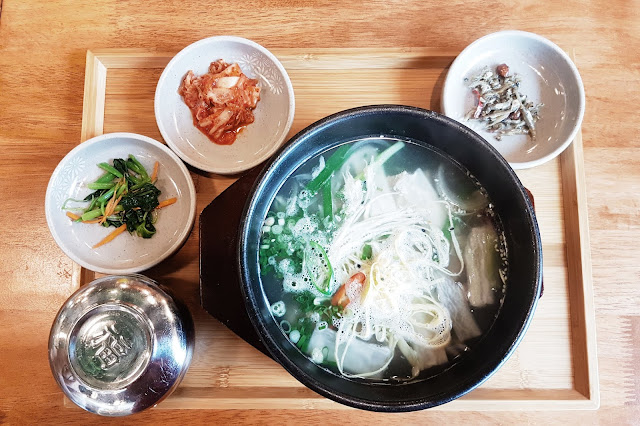 
As for Beef Short Rib Soup (갈비탕), it was a brand new taste to me? I was kinda weirded out by the taste. I have never tasted anything like it. The broth tasted clean and refreshing? Not sure if those are the perfect words to describe the taste but those are the only words that I could think of. Sadly, daging dia macam liat sikit. For someone yang gigi-giginya ada gaps, this was something that made my eating experience less enjoyable. 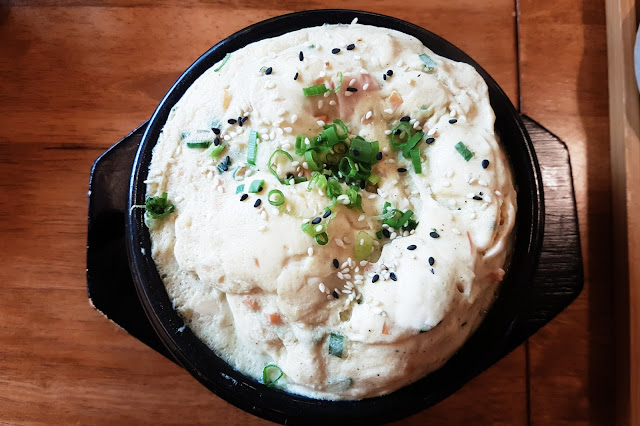 Lastly, for the banchan (반찬), I really liked the veggies ones that I asked for a refill. It was so good! Tak sure nama dia apa. I tried the anchovies and peanuts ones but it was too salty for my liking. Didn't try the kimchi one because I don't eat kimchi or fermented food, as a matter of fact but my best friend said that the kimchi was delicious. I guess it was delicious because she asked for a refill as well. Don't quote me on this but I think they give free refills so feel free to ask for a refill for the banchan?

Didn't manage to get a picture of our drinks but my sister and I ordered Jeju Island Tangerine Juice (MYR 4.90) while my best friend ordered Hot Green Tea (RM 3.90). I don't drink Green Tea but according to my best friend it was good. The Jeju Island Tangerine Juice was good as well but it was quite sour on the first sip and not that sweet. So, there's that.


I felt like I criticized way too much about the dishes that I tried but please bear in your mind that I'm actually a fussy eater and has weird taste bud. I personally would go to Oiso Korean Traditional Cuisine & Cafe, IOI City Mall again because I want to try the other dishes. They offer quite a number of Korean meals that I love and I want to try. And I would love to give their sikhye (식혜) a try. So, I guess I'll see you again Oiso Korean Traditional Cuisine & Cafe, IOI City Mall?
Malaysia Putrajaya Review