October 21, 2017
Wow! Wow! Wow! I didn't realize that it has been 3 years since Misaeng: Incomplete Life (미생 - 아직 살아 있지 못한 자) was aired in South Korea. Meant to do a review about this drama 3 years ago, but I was too occupied with my study and all fun stuff :p I missed the golden timing to do the review (okay, more like to fangirling honestly) but I think this drama is too precious and valuable to be ignored.

Snippet of the drama (From Wikipedia)
Since he was a child, the board game baduk has been everything to Jang Geu-rae (Im Si Wan). But when he fails at achieving his dream of becoming a professional baduk player, Geu-rae must leave his isolated existence and enter the real world armed with nothing but a high school equivalency exam on his resume. Through an acquaintance's recommendation, he gets hired as an intern at One International, a large trading company.

There, Geu-rae meets his boss, manager Oh Sang-shik (Lee Sung Min), who's a workaholic and has a warm personality; fellow intern Ahn Young-yi (Kang Sora), who attracts her colleagues' ire because of her impressive educational credentials and by being extremely competent at any task; and Jang Baek-ki (Kang Ha Neul), a geeky co-worker whose anxious nature masks his inner ambition. Geu-rae learns to navigate and adapt to corporate culture, with baduk as his guide 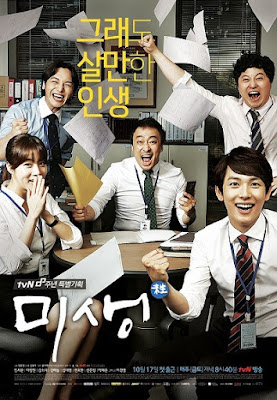 Honestly, I started watching Misaeng because of Kang Ha Neul (강하늘) cause y'know #kanghaneulmydreamoppa but I decided to keep watching the drama because of the drama itself. Misaeng has such a beautiful cinematography despite having a dark and dull tones throughout 20 episodes. All the characters were excellently portrayed too. Scarily (in a very good way), Misaeng managed to flip your opinions about some characters because you will be reminded that all of them are humans and there are no perfect human beings. I hated Jang Baek Ki (I hated Kang Ha Neul guysss T____T) and Han Seok Yeol at first but I learnt to accept them and love them throughout the drama.

However, I think I loved Misaeng so much (maybe a lil bit too much!) because it spoke to me on so many levels. I can relate to almost everything that happened in Misaeng so much that it hurts. Misaeng might be the only drama that I felt so emotionally connected and invested that it drained my energy and emotions. I was a total wreck whenever I watched this drama.

I highly recommend this drama if you are looking for something real and honest and something other than cheesy and romance dramas. Admittedly, this drama might not be a cup tea for everyone but sadly, you will be missing out such an excellent and high quality drama if you do not watch this drama. That's all I can say.

Update: I have included the trailer of this drama so that you can peek through this goodness called Misaeng :)