September 08, 2020
Let's just pretend that I didn't finish writing and posting this post in the middle of COVID-19 outbreak, okay? *pinky promise* 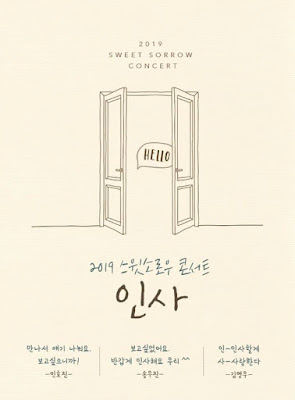 First, let me rant something related to Sweet Sorrow first. I was so sad that I didn't get to attend their Love & Sweet concert last December 😭 It's Love & Sweet kot. So, the concert setlist was probably my cup of tea! My manager said our cuti dibekukan starting November until further notice because we were short-staffed. But, apparently, he was joking. By the time I learned that he was joking, the return flight tickets had become so expensive!!! 😭 I mean, I can still afford the tickets but I don't think I want to spend that much of money just to attend their concerts 😭 So, I regrettably had to pass. 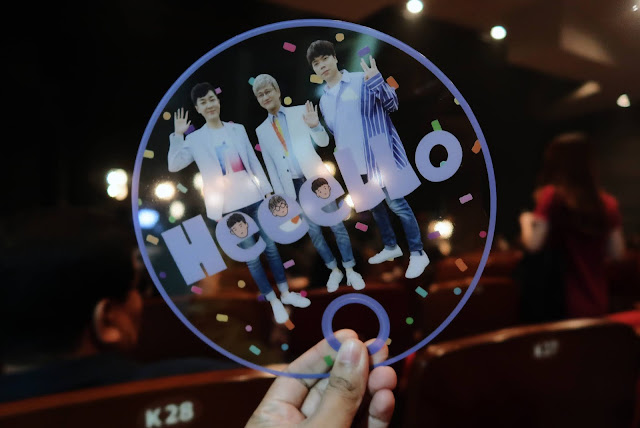 On securing concert tickets
Just like two years ago, I had the help of Kim Young Woo of Sweet Sorrow in securing my tickets. Honestly, it was like a dejavu all over again. I didn't manage to buy the tickets online as they were sold on the Korean website (I don't really read Hangeul, remember?). Additionally, some of the shows were sold out even before I decided to go to the concert. So, I approached Kim Young Woo in hope that he'll get to help me just like before. Thankfully, he came through. 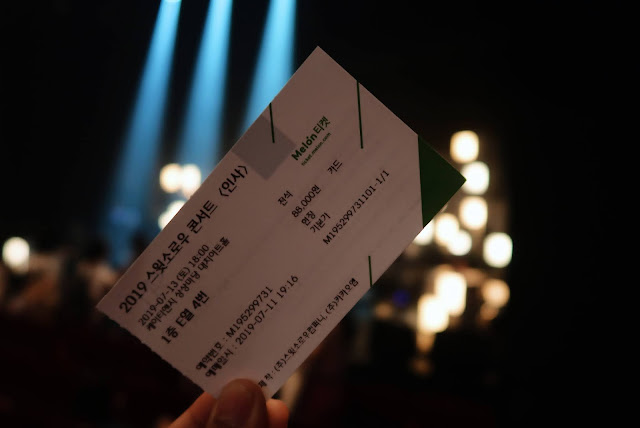 Having said that, I was not at the liberty to choose my seats. So, my seats were kinda everywhere throughout the four days of concert. The first day, I sat at the middle section. The second day, I sat on the left side. The third day, I was on the right side. The last day, I was back at left side. A little bit of TMI, I think Kim Young Woo gave me the seat for his family/friends on the last day because the show was sold out when they first announced the concert. I also sat behind his parents and beside his son and manager.


On concert setlist
Honestly, the concert setlist was a little bit heavy for my liking. I was expecting something merrier and cheerful just like Harmony concerts back in 2017, but nope! We did get few upbeat songs here and there but that's about it. I actually questioned myself if I still want to go for the Day 2, 3 and 4 right after the Day 1's concert ended. The setlist really was heavy, hard, and at times, a little bit depressing. 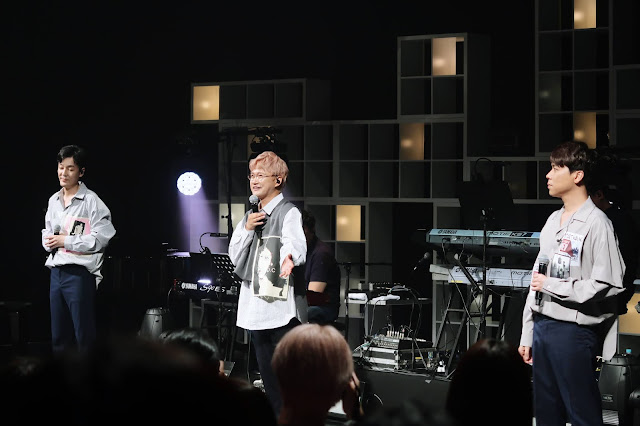 All the fans shared the same sentiments like Sweet Sorrow, me included, so yes, I definitely understand why the setlist was on the heavier side. I just wish that we can greet each other on the happier and lighter side 😊

On the concert venue 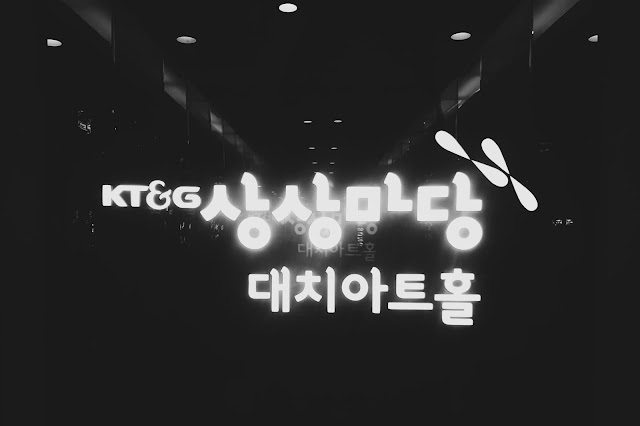 The concerts were held at the KT&G Sangsang Madang Daechi Art Hall. The venue was small, so much smaller compared to the Ewha Womans University Samsung Hall. I kinda liked it because it felt more intimate. The only thing that I didn't fancy that much was it was quite far from where I stayed. Any place in Gangnam is considered far for me, lol. Also, there were a lot of stairs at the nearest subway exit! #pengsan


On the concert vibes
Well, what can I say? I loved the general vibes. Sweet Sorrow fans were as fun as them. They enjoyed the concerts to their fullest which made me enjoy the concert experience. Unlike my first time, I didn't see a lot of middle-aged fans this time around. Instead, they were majority the familiar faces that I've seen in the previous concerts. One thing that still etched on my mind was this one fanboy. He sat beside me on Day 2. Dude was so excited and singing along almost all the songs 😛 He also kept shouting, "Hyung, saranghae!" whenever time permits 😂 Of course his enthusiasm did not go to waste. Sweet Sorrow noticed him and said, "Saranghae! I like your energy! 😊" while giving him thumbs up! Eventually, In Ho Jin went to our seats and took picture with him. 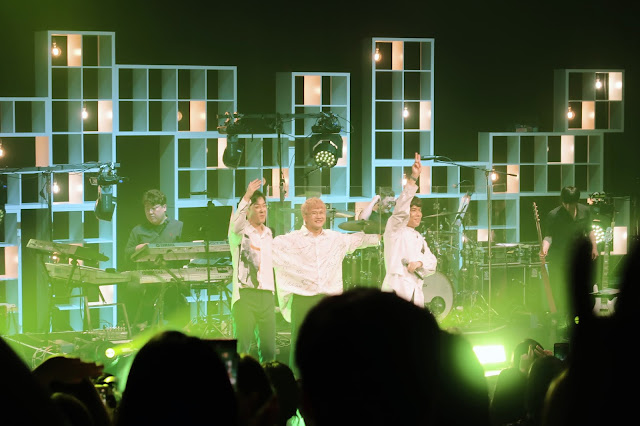 Also, everything resonated with me, so much so that I cried when the Sweet Sorrow members cried. lol. In my defense, it's hard not to cry when they shared their hard time, their doubts of continuing as three-member group, their struggles after Sung Jin Hwan left. It was honest, raw and totally understandable. I personally questioned whether they can continue as a three-member group after singing as four for about twenty years. How will they sound like? Will they sound as beautiful and charming as they were four?


The answer is, they sounded different. A whole lot different. It was hard for me to digest their sounds as three, at first. But then, I kinda get used to it. They still sound beautiful and charming but in a totally different way.

On meeting them at the backstage
Just like the first time, I asked Kim Young Woo if it's possible for me to take picture with them at the backstage on the third day. He said yes and told me to wait near to the backdoor stage. Once their manager ok'd, I went in and personally said hi to them. It was short but I was definitely satisfied and happy. 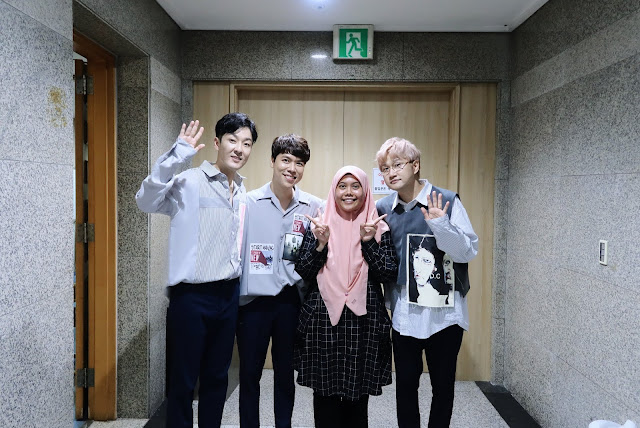 Sweet Sorrow and I

I have to say that Sweet Sorrow really pandai beli jiwa, especially In Ho Jin 😂 They all remembered me as a girl from before. lol. They also mentioned that they read my Instagram posts and kept saying thank you for willing to come to South Korea during summer. I, on the other hand kept thanking them as well as they sang Beautiful a lil bit longer that night 💓


While I do not want to sound so perasan, lol, I do think they read the Instagram posts by fans especially after concerts. On the second night, I posted something along the line of I was so excited to hear a snippet of Beautiful and suddenly on the third night, we got a little bit longer version of Beautiful 💓😭

I don't want to get sappy for no reason. But today was a bliss with Sweet Sorrow ❤ So thankful for I got to hear a snippet of Beautiful live. Thank you for singing along the background song, Sweet Sorrow 😍😭 #스윗소로우 #SweetSorrow #인호진 #김영우 #송우진
A post shared by 그냥, 파라 🍁 (@happilyfarah) on Jul 12, 2019 at 7:14am PDT


Today was another day that I'm thankful for! 😭❤ So thankful for everything but especially thankful and grateful for I got to hear a snippet of Beautiful live once again! This time was a little bit longer than yesterday. My heart felt so full! 😭😍 In case you're wondering why I keep mentioning Beautiful, it's because I have never heard or saw fancams of Sweet Sorrow singing Beautiful. Beautiful and I Love You are my top two favourite songs from Sweet Sorrow 😊 #스윗소로우 #SweetSorrow #인호진 #김영우 #송우진
A post shared by 그냥, 파라 🍁 (@happilyfarah) on Jul 13, 2019 at 6:34am PDT


And, that's a wrap for 2019 스윗 소로우 콘서트 <인사>. I have so much things to say but I'm just too overwhelmed. In short, the whole concerts were a mix of emotions; mainly thankful and sorry. We cried and then we laughed. They were such sweet sorrow. So thankful that we managed to get 4-days concert this year. So thankful for Sweet Sorrow to keep singing harmoniously despite the changes and challenges. So thankful for everything 😭 However, the person that I'm most thankful to is @sweetsorrowkim , for he was ever so kind in helping me to secure the tickets. It was him, mainly who made all of these come true. Truly, thank you! 😊😭🌸 @swtincaptn, @sweetsorrowkim, @sweetsorrow_company 오빠들, 수고했어요 👏 항상 행복하고 건강하세요 😊 우리는 다시 만날 때까지 안녕 🤗👋 P.s: 정말 감사해요, 항상 🌸 #스윗소로우 #SweetSorrow #인호진 #김영우 #송우진
A post shared by 그냥, 파라 🍁 (@happilyfarah) on Jul 14, 2019 at 6:22am PDT

All in all, I had a great time on those four nights. I got to attend their first concert as a three-member group. I got to listen to the new sound of Sweet Sorrow. And, I got to meet them again after two years 💓

Back then, I did tell Kim Young Woo that this would probably will be my last time attending their concerts as I don't think I can afford to go to their concerts again (time wise but more so because I had different plan back then) but then COVID-19 hit like a truck this year and everything has changed ever since then. I probably would not get a chance to see them again in this lifetime but I am satisfied for I had the chance to see them twice. 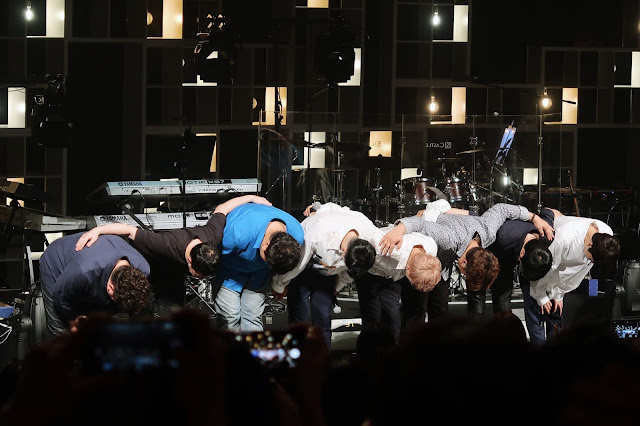