September 19, 2018
Picked up this drama because I wanted to watch anything that is not romance and lovey-dovey stuff. Also, it does not hurt to see Lee Dong Wook and Cho Seung Woo in a same screen.

Snippet of the drama (From AsianWiki)
A power struggle ensues at a hospital. Ye Jin Woo (Lee Dong Wook) is a doctor in the emergency medical center at Sangkook University Hospital. He has a warm heart and charisma. He admires hospital director Lee Bo Hoon (Cheon Ho Jin). One day, he hears from his brother Ye Sun Woo (Lee Kyu Hyung) that the hospital director placed government subsidy money into his personal bank account. On that night, the hospital director dies after falling off an apartment building rooftop where vice-director Kim Tae Sang (Moon Sung Geun) lives. His death is ruled an accident caused by a heart attack. Ye Jin Woo believes otherwise.

Koo Seung Hyo (Cho Seung Woo) begins work as the president of Sangkook University Hospital. He is cool-headed and ambitious. As a businessman, he wants the hospital to become profitable. Other people tell him that running a hospital is different from running other businesses, but Koo Seung Hyo doesn't see why a hospital is any different. So that the hospital can start turning a profit, he decides to transfer 3 departments, including the money hemorrhaging emergency medical department, to other hospitals. Hospital staff members oppose that idea and a strike is led by the vice-director. Meanwhile, Koo Seung Hyo experiences the dark side of running a hospital, including cover-ups on patient's deaths. 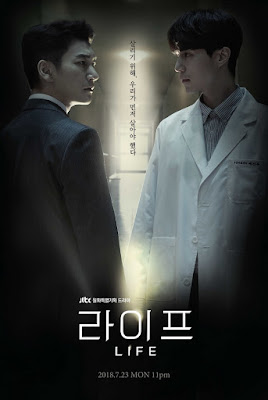 My thoughts
I had quite a high expectation about this show but unfortunately, it didn't live up to my expectation. I found it quite unfortunate because the actors have been giving us nothing but stellar performance but the loose plot made me feel ughhhhhhh! It had so much potential though! T^T

Let me talk about the ending first. I wasn't expecting the ending to be quite dull. Maybe I was looking for something more impactful and for everything to be nicely wrapped, so there's that. Also, what's with sudden romance and love lines?! I think the show could be fine without romance and love lines. Though I have to say watching Ye Jin Woo having a feeling on the reporter and trying to get close to her was cute. It was the same for Koo Seung Hyo as well. But I still stand firmly, that all those scenes looked like they came out of nowhere.

I know this show was all about power struggle but I wish we were given better, solid reasons for the power struggle. Also, wish they slowed down the power struggle a lil bit. There were so much stuff going on at the same time. Should give us the viewers time to breathe and process everything that was going on.

However, I do love some of the moments in the show. For instance, I loved very scene of Ye Jin Woo with his brother. I was happiest at their ending scene. Additionally, I liked every scene of Koo Seung Hyo together with his secretary. They were like a crack in the middle of all seriousness. Also, I loved every scene that shows the humane side of Koo Seung Hyo. Dude can be hard to read, so having those scenes really helped to decipher who he is.

Anyway, I don't recommend this show unless if you want to have a headache or if you don't mind with the loose plot or if you are a die-hard fan of one of the actors.