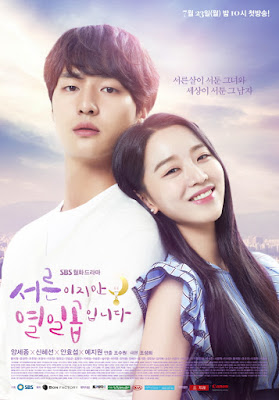 My first impression
Firstly, let me admit that I'm a huge fan of Yang Se Jong (양세종). Dude has been stealing my heart ever since Romantic Doctor, Teacher Kim (낭만닥터 김사부) so I know I'm gonna be so biased! Also, I know I'm gonna be such a smitten fan girl. Dah taraf-taraf Kang Ha Neul dah dia ni in my heart, so that speaks volume. lol!

Now that we got that covered, I can proceed with my actual impression. I think I like this drama so much so that I think I'm going to binge watch it again once it ended provided if it stays good until the end. I have only watched 4 episodes right now (or 8 episodes of 30 minutes, whichever you call it) and I really really really liked those 4 episodes.

I particularly liked the interactions between all the main characters. I especially loved seeing the relationship between Gong Woo Jin and his nephew, Yoo Chan. So much love! So much cuteness! Another interaction that I really dig was between Woo Seo Ri and Yoo Chan. So cute! So innocent! And of course, any interactions that involved Jennifer! Jennifer is my crack!

The first 4 episodes were heartbreaking and sad at some points but funny and hilarious at most parts. I don't usually like funny stuff but I liked the humor in this show. Think it was my kind of humor. Truly had a time of my life giggling over the jokes and humor in this show. However, I also felt sad and like I want to cry at some points. Especially after seeing Yang Se Jong crying. Dude was so good at crying!  However, he also made me smile like a crazy person after seeing his smile. His smile is like sunshine, I kid you not!

I think I should stop fangirling about Yang Se Jong because I can talk non-stop about him and things that make me a fan of him. Otherwise, people will think that I'm such a stupid fangirl -__-

Putting aside Yang Se Jong, I'm truly surprised with Shin Hye Sun's performance. She really exuded that innocent and teenager vibe. She gave me this "Awwwww, why you're so pure and innocent like this?" kind of feeling, considering her age in the show is 30 years old. I honestly was not a fan of her but wow, she made me a fan of her in just 4 episodes. Or, maybe I just love her as Woo Seo Ri?

And, I'm so happy to see Ye Ji Won (예지원) or known as Jennifer, the housekeeper in this show. She's fantastic in comedic acting and eccentric roles so I expect nothing less than her as Jennifer. I hope she's not gonna be just a comedic relief in this show. Hopefully, there'll be in-depth in her character. #pleaseshowdontdisappointme

At this point, you can definitely see me keep watching this show. However, I'm not sure if I'm going to live watch it or binge watch it. I have yet to decide. A part of my heart wants to live watch it so that I can get my weekly dose of Yang Se Jong and humor. However, a part of my heart want to binge watch it so that I don't have to wait for the next episodes. Ughhhh, decision, decision.
#FirstImpression Korean Drama