November 21, 2017
Avengers Social Club (부암동 복수자들) was a drama that I picked up as a filler drama when I had nothing to watch on Fridays but surprisingly, this drama turned to be one of the most awaited dramas every week for me.

Snippet of the drama (From AsianWiki)
Kim Jung-Hye (Lee Yo-Won), Hong Do-Hee (Ra Mi-Ran), Lee Mi-Sook (Myung Se-Bin) and Lee Soo-Gyum (Jun), who all have their own different reasons, carry out a revenge plan.

Kim Jung-Hye is the daughter of a family who runs a big company. She appears straightforward and arrogant, but she is actually naive and cute. Her marriage was made to benefit both families. She tries her best as a wife, but she learns that her husband has betrayed her. To get revenge, she leads the "Bok-Ja Club."

Hong Do-Hee sells fish at a traditional market and raises her two kids alone. Her husband passed away. She is bright and good natured. Her son gets involved in a violent incident at school. She joins the "Bok-Ja Club."

Lee Mi-Sook was an orphan and married. She has tried hard to have a happy family with her university professor husband, but he is violent towards her. She begins to think about her life after she meets Kim Jung-Hye and and Hong Do-Hee. 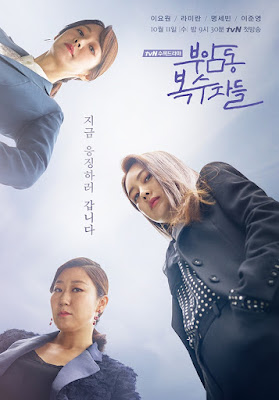 Credit: Here
My thoughts
If only you knew how much I love this show! Aaaaaa, where and how do I even start? I think I love almost everything about this drama. I particularly love the three main leads! Okay, I like Jun too cause he's a part of BokJa Club but the other three main ladies stole my heart! *heart-shaped eyes* *finger hearts*

Avengers Social Club hit all the right spots in my heart. It was a drama that I never knew that I needed it until I watched it. It was promoted as a "revenge drama" but it was actually more than that! Revenge was only one of the plot devices but what you got was a heartwarming yet hilarious drama. I found love, laughter, sisterhood and a family created by choice.


I rooted for all the three unnies to get their revenge as if they were my blood sisters. I laughed at and with them for their antics and hilarious mishaps. I felt hurt when they were hurt. I earnestly wished for their better lives after all the sufferings that they had. Alas, I felt so happy and satisfied when they stood up for themselves and fought all the antagonists and owned their own lives! You go, unnies! :)

Farewell and thank you, one of my favourite shows! I guess I'll come back to you if I need a dose of heartwarming feeling and laughter in my life :)