Now, I will share about the actual shows. But first, let me make an exclamation. Sweet Sorrow's concert was the best concert of my life! Okay, now we can move on. 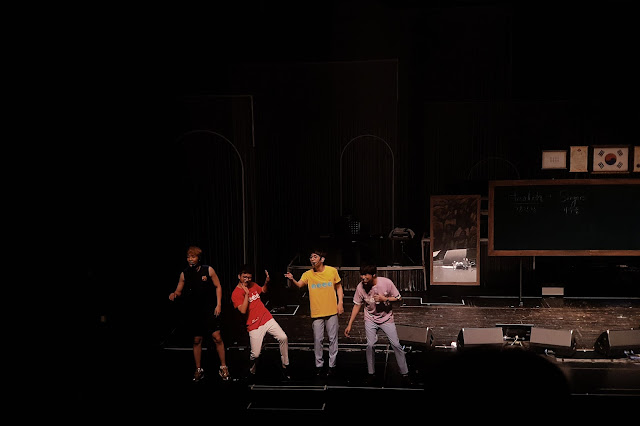 If I were to describe the whole performances in one word, it would be phenomenal!  And yes, that was fangirl in me talking. lol! They were so good that I decided to attend 3 shows instead of 2 shows like I initially planned.

The performances were everything that I expected from them. In fact, they went above and beyond with few surprises here and there. If you happen to see them on TV shows once in awhile (they usually appear on Immortal Songs 2 or Yoo Hee Yeol's Sketchbook), you know how high quality their performances are. They sounded exactly like, if not, better than their recordings or TV shows. The size and layout of the Samsung Hall added with the good sound system also helped, I think. 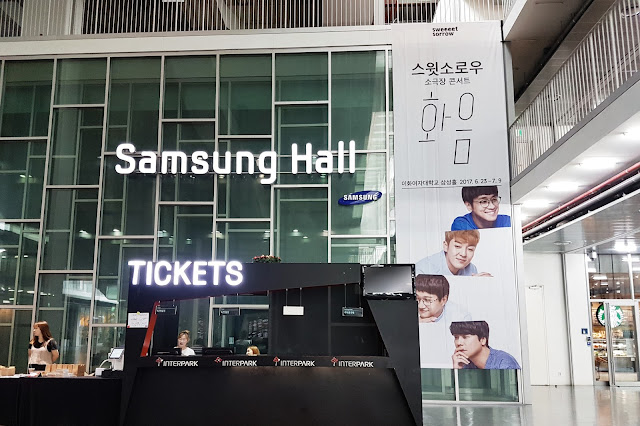 On the 1st show that I attended, I got goosebumps throughout the whole show cause they sounded so good! They successfully conveyed the intended emotions when performing as I felt like crying whenever they sang sad songs yet I was hyper and happy when they sang happy and fast tempo songs.

They had different song lists according to each member's day and other days, which is why I was glad I decided that I attended 3 shows instead of 2 shows. I still wished I could attend all the shows as they sang few different songs for each show. Ughhh :(

But basically, they divided their performances into few segments. The segments/song list that I am about to write might not be 100% accurate as I do not have good memories and I do not recognize all the songs. hehe! I also exclude the ments cause I am not sure if they were even ments. But I have to say, their ments (if they were indeed ments) were totally funny and interesting. I laughed like crazy whenever they had funny ments. I also was indulged by memories when they had walking on memory lane ments.


1. Opening song. They sang something similar to what they sang at Yoo Hee Yeol's Sketchbook.


2. K-pop medley. They sang Mirotic by TVXQ, Lie by BIGBANG, Wild Eyes by Shinhwa, a song that I do not know the title and the singer but I am very familiar with, Replay by SHINee, Couple by SECHSKIES, Can I Get Married by Coffee Boy, Cheer Up by TWICE, Beautiful Night by Beast or currently known as Highlight, and Be Mine by INFINITE. This segment was fun cause I have always enjoyed their K-pop covers. It was also entertaining cause I know almost all the songs and they were witty in making fun of In Ho Jin :D

3. Sign by Sweet Sorrow. This song was my jam for few months before the concert. Absolutely adore this song!


4. Happy New Year by Sweet Sorrow. This song is one of my top favourites too! So much happiness, so much joy! I remembered Sweet Sorrow looked so happy when the audience sang along with them especially during the last part.


5. So Cool by Sweet Sorrow. I honestly do not really listen to this song that much but I super love the show version :)


7. Sunshine by Sweet Sorrow. This is arguably one of their famous songs in South Korea. I usually listen to this song whenever I need a pick-me-up. So, it is kinda weird to listen to their rendition when I was in a good mood. hehe.

8. Pounding Heart by Sweet Sorrow. This is definitely one of my favourite songs. So glad that I had a chance to listen to this song live. They only performed this song on the second show that I attended! :D


10. No Matter How I Think About It by Sweet Sorrow. This is definitely their most famous song as far as I know. Those who watch Running Man might be familiar with this song. The song arrangement was a lil bit different during the shows. I prefer the show version :)


11. Give Me Affection by Sweet Sorrow & Jung Jun Ha. This song is one of my favourite songs (again!) and this segment was my favourite segment of the shows. They had this funny short sketch before singing the song. During the sketch, they introduced the hashtags that we should use for the day. The hashtags were so funny and some of them did not even make sense. lol! They also held a short dance lessons and an enjoyable harmony lesson so that the audience will enjoy the performance. And everyone looked so happy dancing and singing together with Sweet Sorrow! :D

13. A cappella segment. I am not sure if it was a full a capella segment of not cause starting somewhere in the middle of second song, I can hear faint music. During this segment, they used condensed microphone. You basically can hear everything clearly even their coughs. During this segment they performed Good Night by Sweet Sorrow, Wild Flower by Park Hyo Shin and First Love by Sweet Sorrow. I really love this segment cause I am a sucker for a capella! And guys, you need to listen to their rendition of Wild Flower. It was so beautiful and they totally made a justice for the song.

14. The Wind Blows by Lee So Ra. This was one of the goosebumps inducing performances. You have to listen to their rendition yourself. Seriously, I was holding my tears back during their performance.


15. The Words I Tell You by Sweet Sorrow. I just realized the existence of this song during the shows even though this is their old song cause I do not really listen to emotionally heavy songs. I love it!

16. Upbeat songs.They sang medley of their few songs; Drive, Just Get Way (You Deserve It), Dark Circle, & Let's Go to Sokcho!. They also incorporated two other K-pop songs; Nayana by Produce 101 and Cheer Up by TWICE. This was the segment that I mentioned on my previous post where #oppanoticedme. Hahaha! :D

17. I Love You by Sweet Sorrow. This is definitely one of their classics that I really love! Might be one of the songs that I hummed a lot for the past 7 years too cause my youngest sister said she knew Sweet Sorrow cause I always sing this song. lol! Totally love their live performances cause they were cute and lovely! :D

18. Once Again by Sweet Sorrow. This was the last song for all three shows. I do not know why but I always feel heavy whenever I listen to this song. Felt the same when I listen to their performances.

19. Encore. They sang their songs; No Daebak and I'll Sing For You. No Daebak was all fun and entertaining. Can not stress enough how happening this song was. This also was the time where everyone started to bring out their phones and took pictures. As for I'll Sing For You, the vibe was heavy and emotional cause it was the very last song for the night. I love it when all the audience started to sing together with Sweet Sorrow.


So, that was about it for the performances. Again, the performances were different according to the days. But this was what pretty much happened on the three days that I attended. :)