May 07, 2018
Snippet of the drama (From AsianWiki)
I think this is a bad synopsis of the drama but oh well, you know me. I'm lazy to write my own.

Choi Kang Seok (Jang Dong Gun) is a legendary lawyer at the top law firm in South Korea. He has charisma and an attractive appearance. He hires Go Yeon Woo (Park Hyung Sik) as a rookie lawyer for the law firm. Go Yeon Woo has excellent memory. 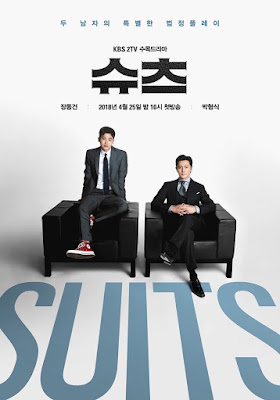 My first impression
Firstly, I have to mention that I'm such a huuuuuuuge fan of the original Suits though I only watched the show until season 5. lol! The original Suits and I had this special connection as it helped me to get through my Business Law class when I was in my 4th year of university.

So, I was a lil bit skeptical when I read that Koreans will make a remake of Suits. I had dozens of questions running in my head. Will it be as good and entertaining as the original? Will they cast a perfect Harvey Specter and Mike Ross? How are they going to Koreanized the scenarios? Y'know, All sorts of stuff.

4 episodes in, I can say that Suits (슈츠) managed to steal my heart and I definitely will keep watching the rest of the show, unless something major happened. I'm no professional in any way but I think the cinematography looked luxurious and it gave a film vibes instead of a drama vibes. The show also exuded modern feeling. You'll understand what I meant by this if you watch the show.

In any cases, I will try to remain partial and see Suits as a standalone show instead of comparing it to the original from now on. I can't wait to see which cases will be highlighted in this show and how the characters will overcome all the challenges. I'm also anticipating high quality humours and jokes for the rest of the show. Hopefully it will be a fun ride! :)
#FirstImpression Korean Drama