December 11, 2017
My team and I were invited to experience one of the snowmobile tours offered by Rocky Mountain Riders (RMR). I thought it would be a neat experience for me to go snowmobiling because this may be my only chance to go for this kind of tour cause you know, after all these years, winter (and its entirety) and I still do not get along well. Haha! After doing some research, I decided to sign up for a Full Day Kicking Horse Snowmobile Tour as a passenger. 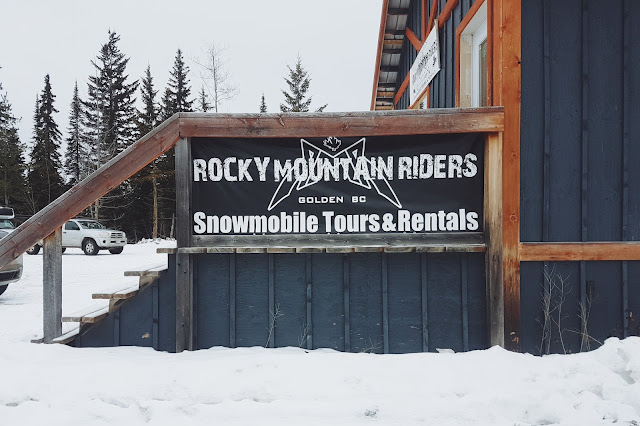 So, riding as a passenger means I did not drive my own snowmobile (obviously!) and I got to enjoy the view for the whole trip! (well, not really!) Honestly, it was one of the best decisions that I ever made this year cause I don't think I will enjoy the whole experience if I decided to ride on my own. I'm pretty sure I will fail miserably and get stuck at few obstacles and corners. Worst come to worst, I may even slip out from the trail and fall down from the mountain and die! A lil bit dramatic but I can't help but to think that way during the tour and especially after the tour.

Anyway, I got picked up from my hotel around 8ish. There was a small accident happened that morning but let just leave it right there. Right after few more pick ups, we headed straight to Golden, British Columbia. It was my first time going to British Columbia so I was extremely excited. It has always been my dream to go to British Columbia at least once, though whenever I think about British Columbia, I always imagine Vancouver, Whistler, Victoria, and Tofino but I think Golden will do for now. 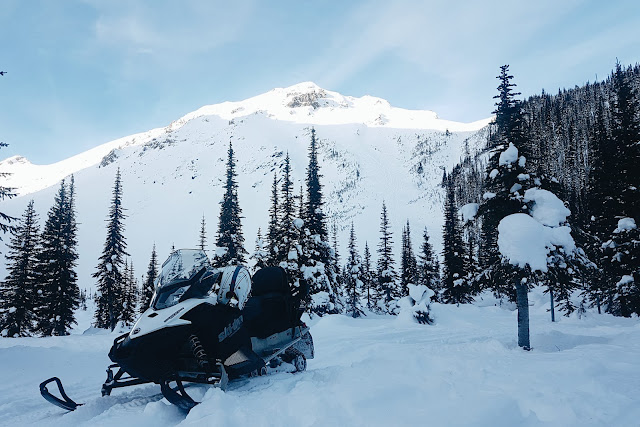 It was my first time too, passing through other national parks like Yoho National Park and and Kootenay National Park. Oh god, they were mesmerizingly magnificent. I felt that the view was more superior than the view of Icefield Parkway. I wish I had pictures to show you guys how beautiful the view was but my shuttle windows were covered by ice, so no pictures! :(

We arrived at Kicking Horse Mountain Resort, Golden where RMR is based at around 10am. Then, we started to gear up to embrace this epicness that is snowmobiling. Special shout out to AJ, Alice and Jay for helping me to suit up and gear up properly. I know, what a princess eh sampai 3 orang sekali kena tolong *rolling eyes* But seriously, I was so impressed with AJ, Alice, and Jay because they were so funny, friendly, and patient when dealing with people like me. Kudos to them! 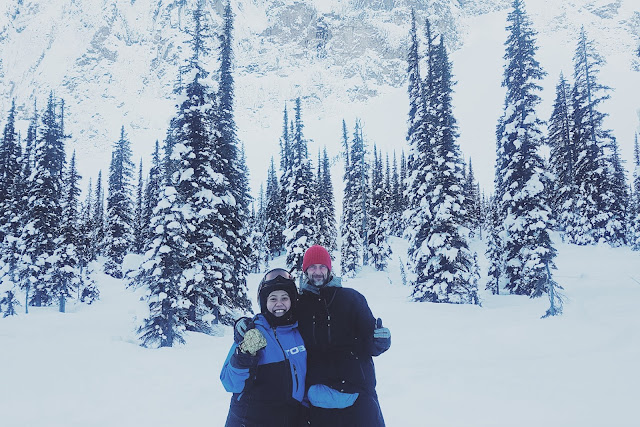 I was paired up with Jay and I have to say that he was such a good driver and guide. He continually asked if everything is okay with me. He also somewhat made me feel quite safe even though he was speeding like crazy to catch up the other guys who joined this tour (those guys were such an adrenaline junkie!) or when he was trying to show off his skills at dangerous points and corners. 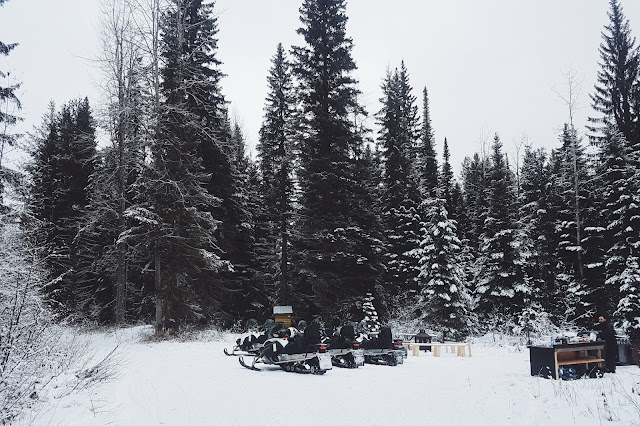 As I mentioned before, I got to enjoy the view for the whole trip as I did not have to really pay attention on the trails. The view was superbly mesmerizing but too bad the weather was not on our side. I can only imagine how magical it would be if the weather is good! And too bad, I did not really get to take that many pictures because I did not have my GoPro (*side-eyeing all my sisters for breaking my GoPro!*) with me and we rarely stopped for the photo ops. 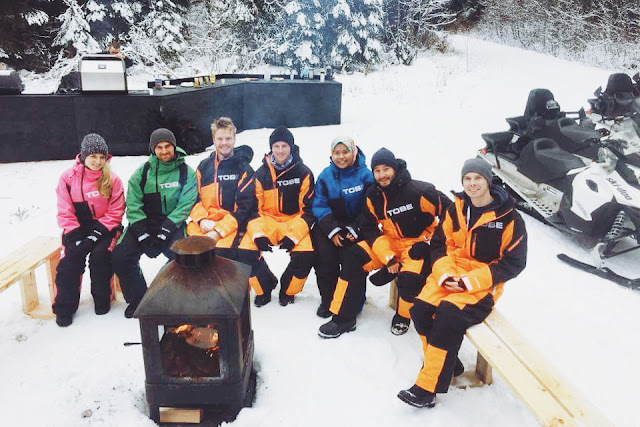 The first half of the tour, before we had our lunch, was quite easy and breezy because we used RMR's private trail and public trail. The trails were quite well-groomed and maintained. There was few sections where the trails are flat so that's a happy news! 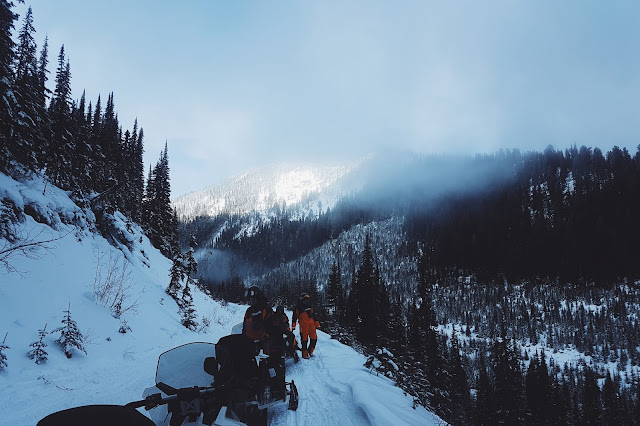 The second half of the tour was quite demanding for my body even though I was a passenger. We sled on an unsupervised trail that RMR helps to groom and maintain. The trail was crazy because it was bumpy all the way to the top! It was also quite frightening because we gained almost 1000ft in elevation! It was so high that I almost cried when I tried to look down. 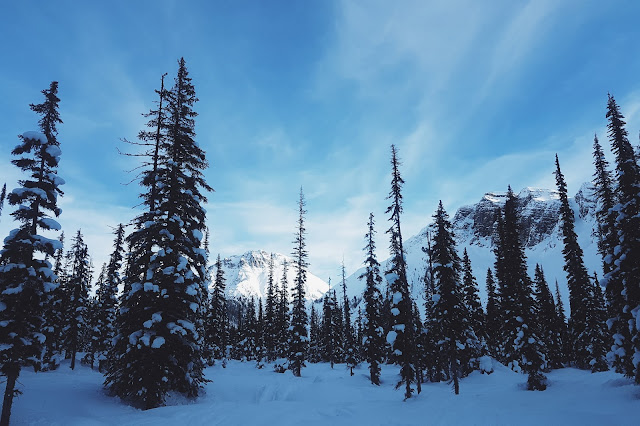 But, no pain no gain, no? After sledding for quite some time, we arrived at the designated stop and oh, god! I was at loss of words when I first saw the view. Subhanallah. Subhanallah. Subhanallah. The surrounding view was magical. I felt so close to the mountains that it felt unreal. For someone who don't ski or snowboard, that moment might be my only chance to be and feel so close to snowy mountains. For that, I am eternally grateful. 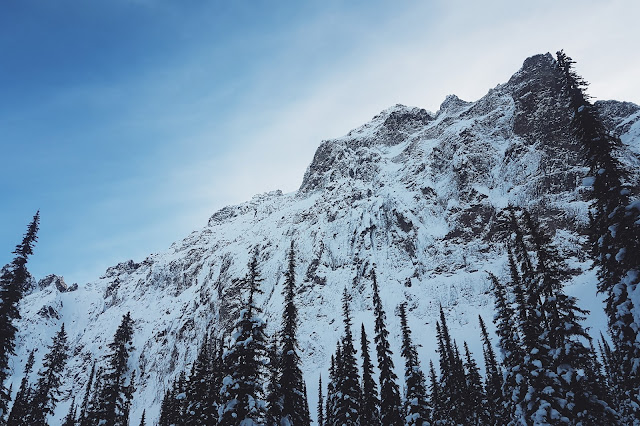 We were given time to do whatever we want at the top. All the guys were riding their snowmobiles like there is no tomorrow. As for me, I obviously just sat around and indulged myself with the view. Soon after that, we headed back to the base.

It was definitely one of the best 5 hours of my life this year. I got to experience something new and I got to see the breathtaking view. I also got to witness and experience one of the best customer service and hospitality service through Alice, AJ and Jay. And, I can finally say that I have been to at least one place in British Columbia. lol! 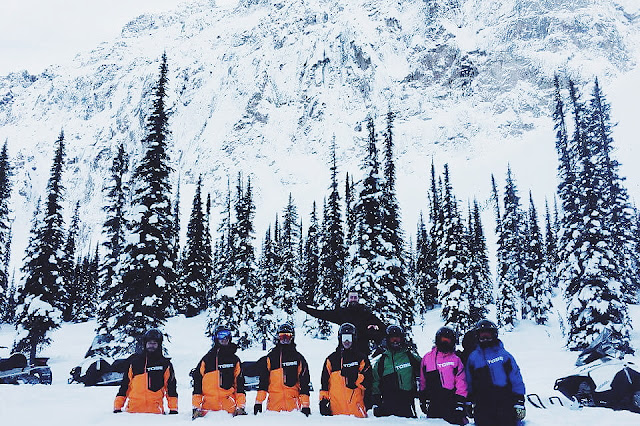 Thank you so much Rocky Mountain Riders for having me for this Full Day Kicking Horse Snowmobile I truly appreciate it! This experience is definitely one of the things that I would remember fondly for the rest of my life! :)
British Columbia Canada Golden Review