November 02, 2017
Midnight Runners (청년경찰) was Kang Ha Neul's last movie before he enlisted, so in some hedonistic ways, I felt obligated to watch this movie. Well, I guess it was more to fangirl in me that pushed me to watch this movie cause you should know by now that #kanghaneulmydreamoppa

Snippet of the movie (From Wikipedia)
The story is about two Korean National Police University students, Ki-joon (Park Seo Joon) and Hee-yeol (Kang Ha Neul), who witness a kidnapping and track it down. When the authorities reach a dead end due to lack of evidence and frustrating bureaucratic obstacles, they decide to embark on their own amateur investigation, which gets them into all sorts of hilarious troubles. 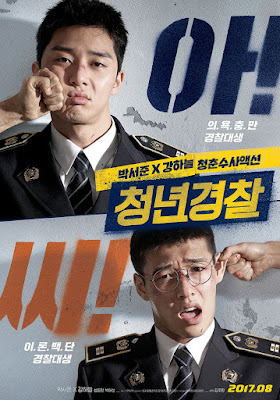 My thoughts
Firstly, I watched this movie solely because of Kang Ha Neul (강하늘) so I was ready to be biased and say all the good stuff. Plus, I read few reviews raving how good this movie was so I was prepared for the goodness called this movie. But sadly, this movie fell short of my expectation, not that I have high expectation of this movie, anyway. I think this movie was still fun and entertaining and I enjoyed it but something was definitely missing and I had no idea what.


Having said that, I had a good laugh during few (okay, more to many) scenes. Both Park Seo Joon and Kang Ha Neul were endearingly hilarious and may I say, dumb in most scenes that you can't help but laughing and grinning at and with them. There were few scenes that really tickled my heart that I did not mind to keep rewatching those said scenes. But, there were also few scenes that were utterly ridiculous that made me laugh at myself and questioned myself "why am I watching this?" or "why am I laughing at this ridiculous jokes/dialogues/scenes?". Joke on me, ha!

I also liked how well Park Seo Joon and Kang Ha Neul characters complemented each other. #bromancegamestrong While I liked Kang Ha Neul being a nerd (or maybe bookworm is the more appropriate term for his character), I did not really fancy Park Seo Joon being a somewhat fool. But together, they had a synergy and made me love them both. Anyway, each to their opinion, right :)

Though it fell short of my expectation, I still recommend this movie if you're looking for something light, fun, and entertaining. And, it does not hurt to have two heartthrobs as the main leads, right :p