October 04, 2018
I went to three palaces in Seoul; Gyeongbokgung (경복궁), Deoksugung (덕수궁) & Changdeokgung (창덕궁) on different days. My goal was to visit the major 4 palaces and Jongmyo Shrine (종묘) but I only managed to visit these three.

I can't share much about each palace and its history as I didn't get to join the interpretive tour and I'm not familiar with Korean history. So, you're better off to read Wikipedia if you want to learn more about the palaces. 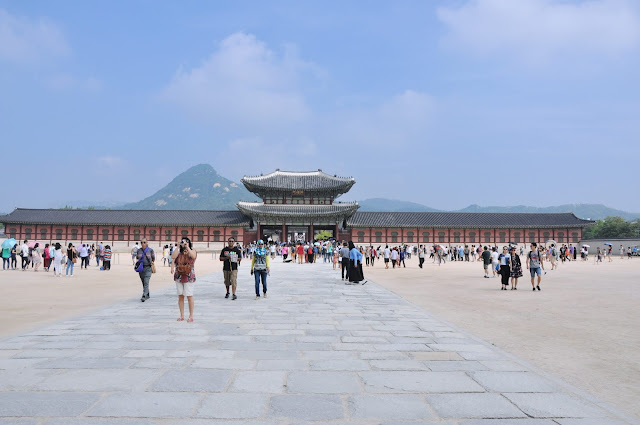 Tip: Interpretive tours are offered in English, Japanese, and Chinese at selected times. However, spaces are limited. So, come early if you want to join the tour.

According to the Visit Korea website, Gyeongbokgung is arguably the largest and the most beautiful palace that remains today. I can attest the fact that Gyeongbokgung is huge as I didn't get to finish the whole compound even though I spent about 3 hours there.

Tip: Be early if you want to get a best spot for the one of the three ceremonies; Royal Guard Changing Ceremony; Gwanghwamun Gate Guard-On-Duty Performance, and Gatekeeper Military Training ,as it gets crowded pretty fast. 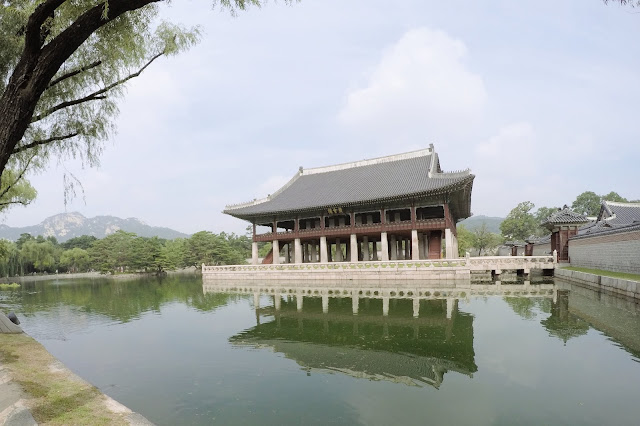 I honestly didn't remember much about my visit to Gyeonbokgung other than the weather was very hot and humid when I was there and there were so many people! Also, the palace is really hugeeeeee! Rasa nak tercabut kaki berjalan dalam kawasan istana tu.

Oh, and this is where I lost my T-money for the first time. It really turned my day upside down when I realized I lost my T-Money because my transportation cost for the whole trip gone just like that. I made a report at the Lost & Found counter but no avail. I actually backtracked my steps to see if I can find it back but again, to no avail.

I decided to leave Gyeongbokgung even though I have yet to finish exploring the whole compound as I was at the verge of breaking down. It was really one of my worst days in South Korea as I was physically and mentally tired from what happened that day. 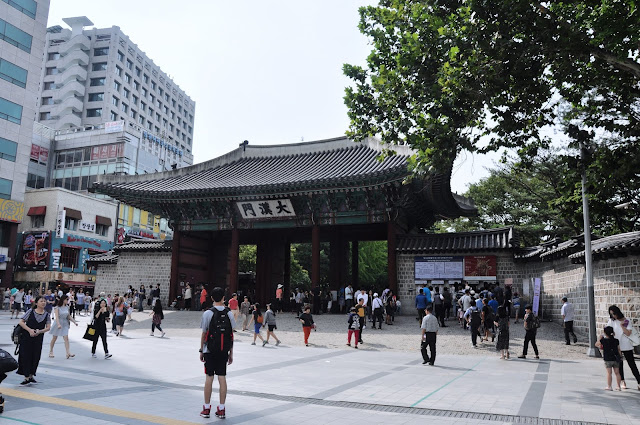 Deoksugung is my favourite palace in Seoul. Simply because I love the architecture. Also, because it has two modern western buildings as part of the palace. It's also a lot smaller than other palaces which means less walking. lol :)

I have seen this palace quite a lot and learned about some of the history through Infinity Challenge. In that Infinity Challenge's episode, they went for a tour of Seokjojeon. So, when I was there, I naturally wanted to join the Seokjojeon tour but all spots for the next tour. which happened to be the last tour for that day, were gone. So, no Seokjojeon for me. 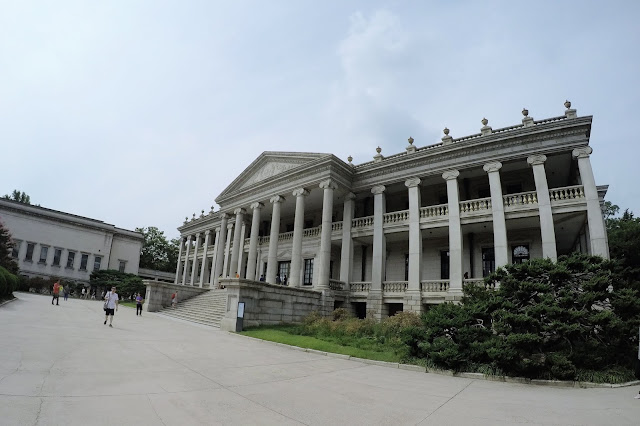 Tip: Spots for Seokjojeon tour are limited. I believe they only have 5 spots for foreign nationals for each tour. Please come early if you want to join the tour as it's on first come first serve basis for foreigners.

As there was nothing that I can do at that point, I decided to explore the rest of the palace area as it is. There were quite a lot of activities were happening at the palace. One of things that I still remember is you can experience the traditional archery activity.

Tip: Deoksugung has the Royal Guard Changing Ceremony as well. This is might be an option if you missed the Royal Guard Changing Ceremony at the Gyeongbokgung. However, do note that it is not as grand as Gyeongbokgung's. But, there's going to be less people which should be a happy news if you're not a big fan of crowded palace. You win some, you lose some, no? 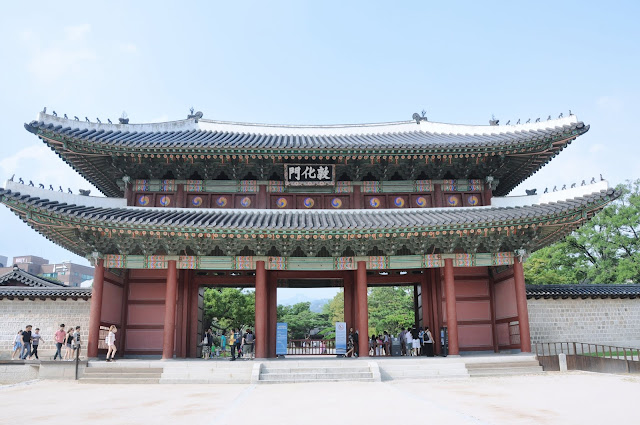 To be honest, I can't recall much about Chandeokgung. It was the last palace that I visited and I guess at that point, everything looked similar to me. Can't help but to feel that way after visiting these three palaces in three days in a row.

One of my goals when I decided to go to Chandeokgung was to visit the Huwon (후원) or known as Secret Garden. I have read so many reviews saying that the Secret Garden is really gorgeous and all so I wanted to see it with my own eyes.

Unfortunately, the tickets for the Huwon Tour were sold out. Apparently they only sell 50 tickets on site for each tour and the on site ticketing starts at 9:00 AM. I was there around noon, so memang dah habislah tiket. 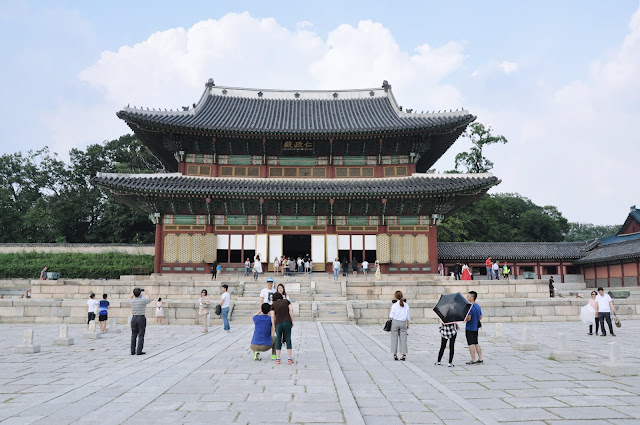 Disappointed by the fact that I didn't get to grab a ticket for the Huwon Tour, I decided to cut my visit to Chandeokgung short. I only explored a lil bit here and there before I left.

Again, like I mentioned before, I can't recall much about Chandeokgung. But there was one thing that I still remember until today. I saw Rapmon or currently known as RM or Kim Najmoon (whichever you call him) of BTS when I was there. I didn't get a picture of him because everything happened in split seconds but wow, what a luck eh? 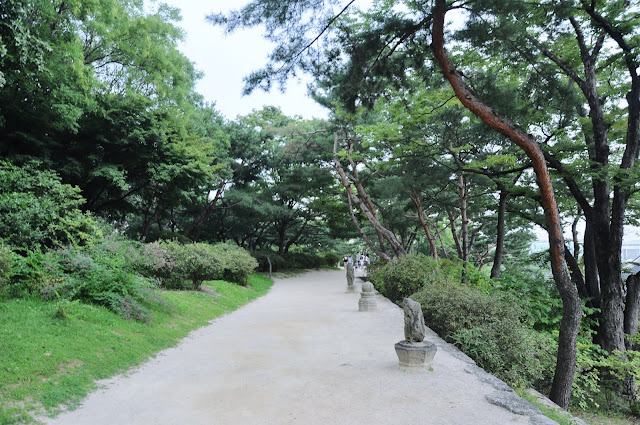 I was sitting under a tree to catch my breath when I accidentally made an eye contact with him when he was walking by. I wasn't sure if that was him but I guess he noticed that I was mouthing, "Rapmon?" He nodded. smiled and the walked away. Looked like he was rushing to go somewhere else. So yeah, I actually met or saw a Korean idol at a palace. lol :)
Changdeokgung Deoksugung Gyeongbokgung Seoul South Korea 경복궁 대한민국 덕수궁 서울 창덕궁