November 12, 2017
Pledis Entertainment (플레디스 엔터테인먼트) was the last K-pop company that I went during this trip. Initially, I did not plan to go to Pledis as I was tired and already ran out of energy but decided to change my mind as it was maybe 1 or 2 station away from where I was. Can't really remember. Haha.

Pledis might be one of the easiest K-pop companies that one can go to because the direction is easy and straightforward. I think they just moved to their current building when I was there. The building looked nice on the outside but gave an "incomplete" impression. I don't know if I make sense or not but that's how I felt.

Pledis was the only company that I spent time waiting outside of the building. I went there to see the building but got stuck waiting for the unknown for almost 3 hours. Or, was it 4 hours? It was all because I met a SEVENTEEN's Korean fan girl.

Honestly, I was not hoping to see anyone especially SEVENTEEN's members at all (I'm a fan of SEVENTEEN if anyone curious) but the girl said that the some of the members were in the building cause she heard them practising singing. She also was so sure because it was Jeonghan's birthday and SEVENTEEN usually do V-live at their company whenever they celebrate members birthdays.

On a totally irrelevant note, I can't believe how many gifts that Jeonghan got. I was there for only few hours but the gifts kept coming and they came in various sizes and price tags. It was like a silence competition and honestly, it was actually quite scary to see how much these fans spent on idols.

So, there I was waiting and hoping that I will get to see a glimpse of SEVENTEEN. In the first 2 hours, I only saw few people that I recognized from watching Seventeen Project. I saw their CEO, dancing teacher and composer but none of the members. But lo and behold, this girl was so lucky to get a glimpse of SEVENTEEN's Hoshi & NU'EST's / Wanna One's Minhyun. Say what?!

Will talk about my first and honest impression of Hoshi and Minhyun at the end of this post. And please don't expect rainbow and unicorn as you might be disappointed.

After seeing them, I decided to leave but I first went to a convenience store to buy banana uyu to quench my thirst. When I was on the way to subway station, I bumped into the Korean girl again and she said, as soon as I left, Woozi came to the building! It was not my luck to see him but the girl was so happy because her bias is Woozi. Good for you, girl! :) 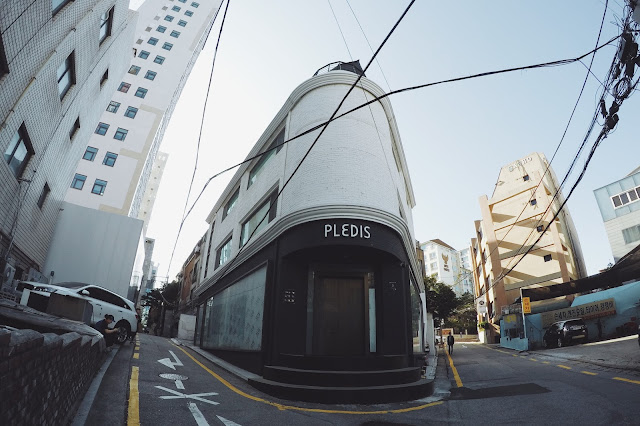 So, here is my first and honest impression of SEVENTEEN (세븐틴)'s Hoshi & NU'EST (뉴이스트)'s / Wanna One (워너원)'s Minhyun.

SEVENTEEN's Hoshi
Hoshi looked exactly like how he look like on TV. He was never in my handsome guys list so, there's that. Admittedly, he was quite cute, like a bunny. Size/height wise, he looked smaller than what he look like on TV. But I guess everyone knows that TV adds few pounds. Surprisingly, he was not that friendly as he did not smile at all and he looked quite annoyed. I guess I just had this expectation of him to be a ball of sunshine, full of smiles all the times. He ignored four of us despite the other three kept saying 안녕하세요 to him. He also avoided from making eye contacts with the other girls. Was quite turned off by his attitude but I just gave him benefit of the doubt. He might not be in the mood and was tired cause he cycled to the building. Who knows?

NU'EST's / Wanna One's Minhyun
Minhyun on the other hand, was asdfghjkl. Honestly, I did not recognize him at all when I saw him. I figured he might be one of the NU'EST's members but I did not know his name. Can't blame myself cause the only NU'EST's song that I know is Hello. I actually felt bad afterwards for not recognizing him. Sorry, Minhyun! I felt extra bad as NU'EST had a small presence in South Korea (before they went to Produce 101 Season 2 and gained booming popularity) that none of us or other people over there seemed to recognize him and he actually walked around without his manager or staff.

Anyway, back to the topic. Minhyun was so dreamy! This came from this girl who has no idea who he is at that time. He looked so handsome and sharp and he oozed celebrity's aura. He looked super tall too. His proportion was 100%. Still can't get over how handsome he his in real life. He got brownie points for being polite and kind too. He bowed to us and greeted us eventhough all of us did not know him. He even smiled to us and asked how we were doing while being awkward himself. He also waved at us when he was leaving. He might be one of the most polite, nicest and kindest K-idols that I have ever met or seen.

Sadly, I got no picture of or with them because everything happened so fast. I did not feel much about Hoshi but I was sad that I did not think about taking picture of or with Minhyun as he walked past me few times. Now that he's getting big and famous, it will be hard to see him like that again. T___T
Gangnam NU'EST Pledis Entertainment Seoul SEVENTEEN South Korea 강남 뉴이스트 대한민국 서울 세븐틴 플레디스 엔터테인먼트